Natural beauty and amazing wildlife surround the Lake City area.  Lake City lies at the heart of a dense woodland caressed by some of the most pristine streams and rivers in the world and they are home to some amazing creatures.

A small, endangered population of Wood Storks makes its home in the swampy woodlands of the area, one of only three places in North America where they appear. Florence County is also known to be home to endangered species such as bald eagles, red-cockaded woodpeckers, star-nosed moles, and pickerel frogs, as well as the stately bald cypress tree.

Ecotourism draws visitors to the Lake City area every year, with hiking, canoeing and kayaking along local waters a sure way to spot birds, insects and animals difficult to find elsewhere. 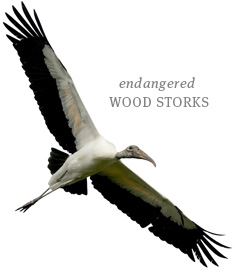